Sensitive skin needs special care. That’s why Eucerin has been using their expertise to create highly tolerable and effective products since the 1950s. This pioneering spirit has led the way, first with its pH5 ointment, then with a complete range of body care products in the 1970s. However, developments in research methods led to a real breakthrough when three active ingredients were shown to both medically protect the skin's acid mantle and activate natural enzyme activity from the inside out.

A challenge for skin research

Sensitive skin is an increasingly common condition that affects both men and women, can occur at any age and on any part of the body. Because sensitive skin is unpredictable, it can look red and scaly, and feel dry and itchy. This can result in considerable discomfort. Yet it’s only recently that its causes have been more fully understood, and the role of skin's pH level recognised.

For over a hundred years it's been known that healthy skin has a protective acid mantle, or hydrolipid film, with a pH level of around 5. This slightly acidic pH was understood to be relevant only to the skin’s surface, defending it against microbial infection and alkaline irritants.

"All of these systems depend on enzyme activity," explains Alexander Filbry, PhD, Head of Product Development Body Care Eucerin. "And any change in pH level reduces this activity, leading to water loss, rough skin and the penetration of irritants. Our objective, therefore, was to identify active ingredients that could address all of these issues, and stimulate skin’s own enzymes to start protecting itself again, thus maybe even avoiding the development of sensitive skin."

"The individual properties of our three ingredients were promising. Dexpanthenol stimulates skin regeneration and has also been scientifically proven to act as a powerful humectant, a property it has in common with Glycerin," says Filbry. “Meanwhile pH5 Citrate Buffer works to restore skin's natural acidity. However if we were going to find out how they might affect enzyme activity, we had to devise a new type of test method”.

The result was a new ex vivo method called the trypsin assay. This new method was developed by the same Eucerin team that received an award for the Best Paper of 2004 from the Society of Cosmetic Scientists. It focuses on the function of trypsin, one of the stratum corneum’s most significant enzymes, which plays a key role in the production of corneocytes (the dead skin cells that make up the stratum corneum) and their shedding from the skin's surface.

"After repeated washing of human forearm skin with water or product formulations, we extracted the uppermost layers of the stratum corneum to determine the specific activity of the tryptic enzyme," says Wolber. This new method demonstrated higher enzyme activity after the application of mild surfactant systems at acidic pH levels.

“We then used it to investigate the enzyme protection and activating efficacy of our acidic humectant active combination. The results were impressive, revealing considerable stabilisation of activity.”

“Of course we are proud that the Eucerin test method was internationally recognised. However it is even more important to us that it proves that the actives included in Eucerin pH5 EnzymeProtection work together to, so to say, strengthen the skin’s natural defences from the inside out.” 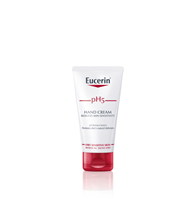 A mild, alcohol-free toner that refreshes the skin and helps it to breathe better.
More Details

This mild but effective cleanser removes impurities and make-up and helps skin to maintain its natural moisture balance.
More Details