Facial Atopic Dermatitis in children – Identifying and alleviating the discomfort

Between 10-20% of children globally have Atopic Dermatitis, a chronic but non-contagious skin disease that also affects adults. Also known as Atopic Eczema, typical symptoms include dry, irritable skin which occasionally flares-up causing mild to intense itching, inflammation and soreness. While there is no known cure, regular and consistent care can help to alleviate the symptoms and prolong the non flare-up phases.

What is Atopic Dermatitis?

Atopic Dermatitis (or Atopic Eczema) is an uncomfortable and sometimes distressing long-lasting skin disease that is very common in children across the globe, although predominantly in the Western world. While around 2-5% of adults are affected, 10-20% of patients are children and babies. Most sufferers (90%) get Atopic Dermatitis before the age of five and many children do grow out of the disease.

Typically Atopic Dermatitis goes through two “phases”. During an inactive phase skin is very dry, irritable and flaky and needs to be moisturised on a daily basis. Active phases (or “flare-ups”) are more painful and need to be treated with topical medications to calm inflamed skin and alleviate itching.

Atopic dermatitis symptoms in babies appear on faces and scalps.
Affected skin in babies and children often is dry, scaly and itches a lot.

The most common areas for Atopic Dermatitis to appear on babies is the face and scalp (especially on the cheeks) as well as the body (elbows and knees).

With children that develop the disease after babyhood, the rash often begins on the body - in the creases of the elbows or knees - and it is common to see a young patient with atopic skin on his or her neck, wrists, ankles and/or the creases between the buttocks and legs.

Atopic Dermatitis is made worse by scratching as nails break through the skin barrier and expose bacteria, causing skin to get inflamed. Babies often rub their skin against bedding or carpeting to relieve the itch and in children of all ages, the itch can become so intense that they cannot sleep. As well as being distressing for the child, parents can feel powerless to help which, in turn causes psychological stress. The good news is that effective treatment and good skin care can alleviate much of the discomfort.

If you are unsure about your symptoms seek the advice of a doctor or dermatologist.

Dermatologists have identified several causative and contributory factors. For example:

Once affected, there are a number of reasons why symptoms get worse or flare-ups occur. Sufferers have a deficiency of natural moisturising factors (NMFs) (such as amino acids) and disturbance of the epidermal lipid metabolism. This explains why their skin is more likely to be dry with a disturbed barrier function. 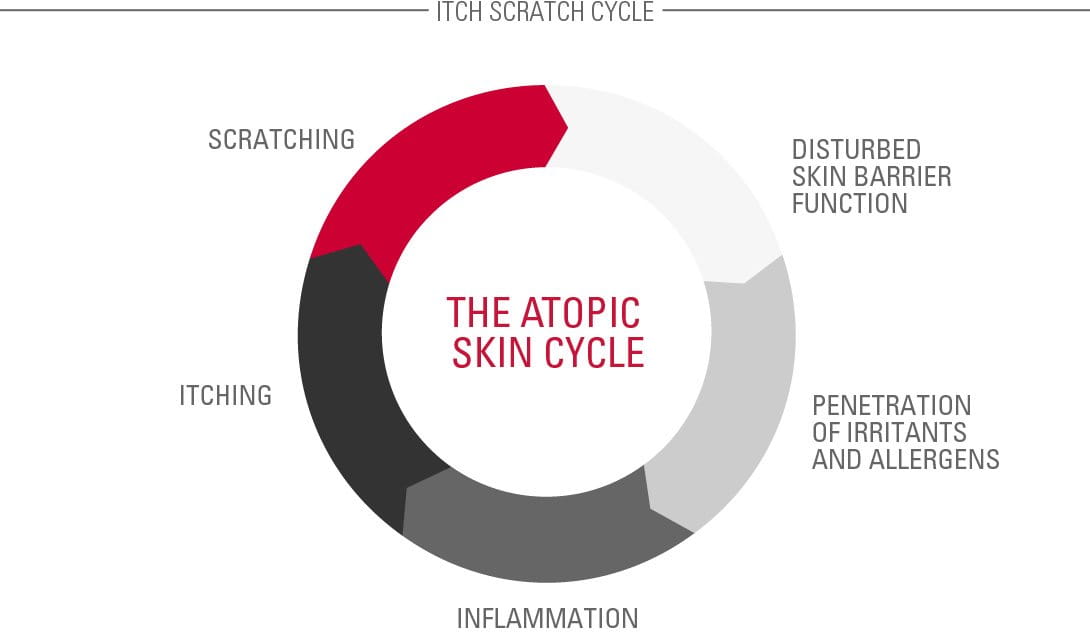 Problems are often caused by the Atopic Skin Cycle. This begins when a child scratches an itch and disturbs their already fragile skin barrier.

This causes a bacteria called Staphylococcus aureus to multiply and infect the skin.
The infection causes inflammation, which causes itching. The cycle starts all over again.

Certain foods, drinks, textures and textiles are thought to cause or affect atopic skin.

Parents should avoid triggering foods, materials and textiles in children.

Some of the side-effects of the disease – such as stress and sleeplessness – can also make symptoms worse.

Managing the symptoms of facial Atopic Dermatitis in children

It can be extremely distressing for parents to see their child suffering but although there’s no cure for Atopic Dermatitis, regular and consistent treatment can help prevent the disease getting worse, calm the skin – relieving pain and itch – reduce emotional stress, prevent infections and stop the skin from thickening.

A treatment plan will probably include a skin care regime as well as some lifestyle changes.

For non-flare phases, daily use of emollients is vital.

Emollients, or moisturisers, include lotions, creams, face creams and bath and shower oils, all of which work together to keep skin hydrated, supple and protected from irritants. Their regular use is fundamental to the care of atopic skin and might prolong the non flare-up phases. Children and babies with facial Atopic Dermatitis should apply moisturising face creams at least twice a day.

Regular use of moisturisers is important to prolong the non flare-up phases, among others.

Key ingredients in the formulas of emollients can include:

When flare-ups occur emollients need to be used in conjunction with active care treatments such as topical creams and anti-itch sprays. These topical creams usually contain corticosteroids like hydrocortisone.

Use of hydrocortisone to ease acute symptoms of Atopic dermatitis in children is possible. Long-term usage is not recommended though, as hydrocortisone may thinnen skin.

Hydrocortisone is known to be effective and fast-acting and it alleviates the itching of flare-ups. However, many parents feel uncomfortable about using it on childrens’ skin as prolonged use can have several negative side effects. Also, it loses its effectiveness if used continuously and it can’t be used on large areas of skin.

Eucerin‘s Acute Care Cream has skin caring properties that have been clinically proven to significantly improve the skin‘s appearance during flare-up phases. This caring skin solution helps reduce the use of hydrocortisone during flare-ups. A clinical study shows a comparable cosmetic effect of the skin caring properties of Eucerin Acute Care Cream to the effects of a 1 % hydrocortisone cream on the complexion of atopic skin. Eucerin Acute Care Cream is not a pharmaceutical product and is not meant to replace one.

Further advice for parents with children with facial Atopic Dermatitis